Skip to content
Home » FAQs » What are the methods Casino War cheats use to cheat the game? 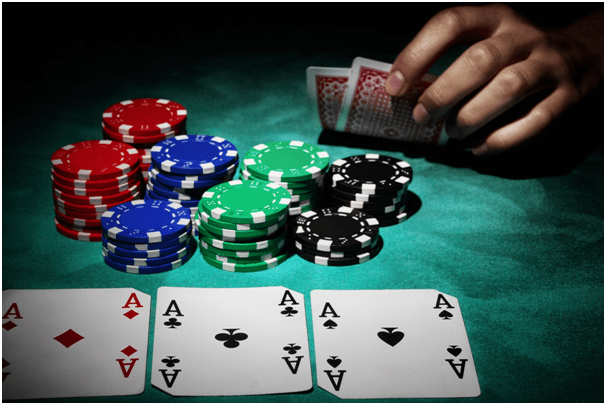 Casino war is one of the most simple casino table card game, which is easy to play. The game of war as it is played in the casino is similar to the game which you had played when you were a kid and here you’re basically just placing a bet on which player will draw the highest card.

In most casinos, war is played with six decks at a time. Casino war cards are ranked just like in poker, except that in casino war, aces are always high cards. The suit doesn’t matter.

In order to engage in war with the dealer, the player is forced to double their original bet. If you play War in the casino, you’ll notice that the dealer also doubles their wager, but this really has no impact on the way the game is played.

As casinos have different rules for playing the casino war game. Specially after a tie during war. At these casinos, a tie during war means that the player earns a bonus equal to their first wager. This bonus usually pays 3 to 1, but an important wrinkle in the rules of casino war holds that the first bet still loses. Mathematically speaking, this tie after the tie bonus rule is the same as casinos that don’t offer a bonus for a second tie. To make things a little more complex, most casinos that offer casino war allow a tie bet as well, only on the first two cards dealt. This bet pays out at 10 to 1.

Casino war is a negative expectation game, with the most common rules (the six deck version of the game) giving the house a 2.88% edge on the first round, a 3.70% edge on surrenders, and an 18.65% edge on the 10 to 1 payout tie bet. Obviously, casino war does not offer very good odds for the casino punter, but for casino cheats who try to alter the way the game is played, these kinds of statistical odds aren’t really a concern.

Well players who cheat in the game are casino war cheats. These players can do anything with the cards or the game play. Casino table games involving cards are vulnerable to all sorts of card cheats. Casino war is not based on poker, like Caribbean Stud or Let It Ride, but because the game involves the use of playing cards, it’s vulnerable to traditional card cheats.

In fact, card cheats like marking cards may be easier to use to cheat casino war because the game involves as few as two cards: the dealer’s card and your own card. If a casino cheat were to mark high-value cards, the ones more likely to beat his own or to beat the dealer’s lower cards, he’d have a distinct advantage in knowing whether to go to war after a tie or whether to place a high paying 10 to 1 tie bet before the game starts.

Card marking is hardly the only cheat casino player will try to gain an advantage at casino war. Dealer collusion is a real problem in casinos, and casino war dealers could easily work out a system with a punter ahead of time to signal to the cheat what sort of bet he should place. For example, if a dealer could surreptitiously peek at the cards about to be dealt, he may be able to signal to the cheater if a tie bet (the bet in casino war that offers the best payout to the player) would pay off. The dealer could also use any number of card dealing tricks, such as dealing from the bottom, to make sure that the cheater won more often than he lost.

The problem with dealer collusion is that there’s no guarantee that a casino dealer would actually go through with a collusion deal. The cheater may pay off the dealer ahead of time to cheat; the dealer takes the money, and then doesn’t cheat at all. In that case, the cheater would have no means of approaching the dealer and trying to get his money back. After all, he’s cheating the casino illegally.

Hiding or palming cards could help a casino cheat beat the dealer at war. For example, keeping a literal ace up his sleeve could help the cheat switch out his card with the ace, the highest value card in the game. Unfortunately for the cheat, this switch would be hard to pull off, since casino war doesn’t offer the cheater much room to switch out a card without the dealer or casino security noticing.

Casino war has simple rules that leave fewer opportunities for traditional card cheating than other card games. Besides dealer collusion or card marking, the simple rules of casino war make it hard for a cheater to successfully influence the outcome of the game.

Also as cheating at the casino can lead you to land in a prison and other shame among the other players it is better to play the game for entertainment as with game of chance it is your destiny that plays the role. Obviously you should now play like a fool but have thorough understanding of the game rules and the outcome of your moves.