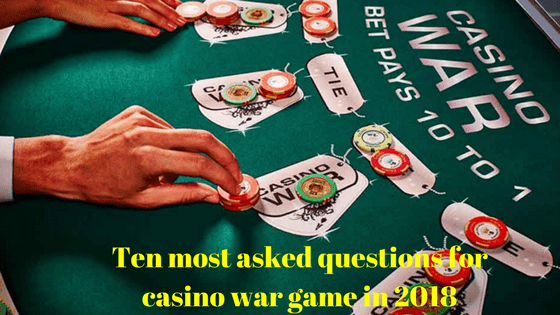 In one of the online forums at Trip advisor it was found that most of the casino players find casino war as the dumbest of games ever invented. Maybe that is the reason that you will find less of casino war tables at land casinos. But for a new casino fan this game is wonderful he game as it is one of the most easily understood casino card games, and is one of the only card games where players can beat the dealer more than 50% of the time.

There are many questions that come up in a player’s mind when he/she thinks of playing this game. Here are the ten most asked questions for casino war game in 2018 and their answers for you.

1. Where can I play real money  Casino War in Australia?

This is the most asked question as Aussies or international players visiting Australia need to know as where to play real money casino war in the country. Well though there are 60 land based casinos in Australia but only few offer casino war tables. You can enjoy casino war at Skycity Darwin, Crown Casino Perth, Crown Casino Melbourne and Star City Sydney.

The casino war tables are very less but the game is still alive here with great casino promotions and offers to grab.

Now this is another very often asked questions since the new gambling bill has passed in Australia in 2017.  As a free game you can still play at online casinos like Royal Vegas, Jackpot City, All Slots and Platinum play (remember most of these sites are now not offering real money gambling for Australians). But if you want to play casino war with real money then you can enjoy it at Rich Casino, Superior casino, Emu Casino and many others of such kind. The minimum bet for playing the war game at these casinos varies between $0.1-$100.

3. How many decks are used to play casino war?

Casino war is normally played with six decks, but in some cases such as in many online versions a different number of cards are used in the shoe. This can have a significant effect on odds and probabilities for particular scenarios, especially when less than three decks are in play. For example: when playing with six standard decks (312 cards in total), the house edge on a tie bet is 18.65 per cent; but using just a single deck of 52 cards, the edge on the same wager almost doubles to 35.29 per cent.

4. What are the rules to play Casino War?

The rules are fairly straightforward when it comes to this game and are easy to follow.

5. When should I surrender in casino war? 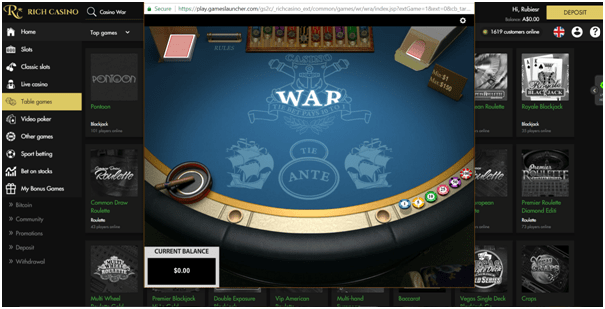 6. What is card burning in casino war?

Some casino war variations see cards discarded, which is known as burning, prior to going to war but after a tie has occurred. Some online variations see three cards burned, while others see none. The same variation applies with land casinos. This doesn’t have any change on the house advantage, but if no cards are burned it will tell you whether or not it would’ve been the better choice if you chose to surrender.

7. Should I make a tie bet in casino war?

With such a great payout of 10:1, the tie bet can seem quite appealing. Ultimately, though, it can be a suckers bet to choose. The house edge is a whopping 18.65%, meaning it is very unlikely you will win by placing a wager on the fact that both you and the dealer will have the same card first up. You are better off making a basic bet than a tie bet.

8. Is the house edge better if I play online?

The house edge for casino war online is 2.88% for standard bets while at land-based casinos it can be anywhere from 2-3% for basic bets. In other words, there isn’t a huge difference playing online or offline and it basically comes to whether or not you prefer to play online or not. Some rule variations which may also be available in land-based casinos and online do decrease the house edge, such as when a player goes to war and you tie you will get a bonus payout. With this rule in place, the house edge can be reduced by 0.55%.

9. What are the bonus payouts in casino war game?

In a stock-standard game of casino war, the payout for victory after going to war is the same whether you tie or trump the dealer. However, many venues and online casinos offer a bonus payout when the player’s second card matches the value of the banker’s. When this rule is in play, the original bet is usually paid out at 2 to 1 odds in addition to the even money return on the war wager. For example: if you bet $10 first up, then go to war with another $10 and tie on the second card, you win $50 all up. With this rule in place, the odds do improve for the player: the house edge decreases by approximately 0.36 per cent with one deck in play, and 0.55 per cent with six decks.

10. What deposit options are available to play casino war at online casinos?

If you have chosen to play casino war online rather than at a land casino, you’ll need to know what methods are available to make a deposit and how to do so. Most of the online casinos offer an extensive range of payment methods including Visa and Mastercard, Neteller and Skrill, bank transfers, and other payment methods. These can all be easily used by going to the banking interface choosing the preferred method and entering the amount you wish to deposit. Note that many casinos may not allow you to deposit in AUD and so you need to pay for the exchange currency rate. It’s always better to ask the online casino customer help team before making a deposit.

Do ask any other questions that you have in mind and we will be glad to answer for you.