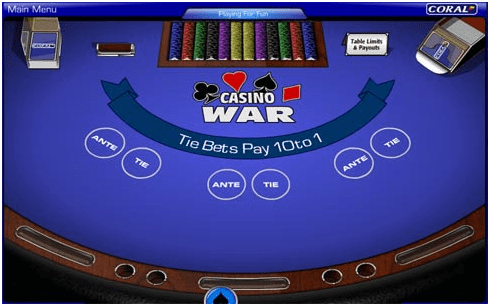 Do you know that the Russian version of War game, known as P’yantisa, is played with 36 cards from the pack, while the original childhood version is played with a full pack of 52 cards? The game has developed over the years and has now become more popular in casinos. The basic game of War was traditionally played with two players, but additional versions of the game have emerged allowing up to four players to partake in a game.

Casino war has a little scope to make a wrong or right move during the game because it’s simply a case of the highest card wins. However, there are some simple tricks you can bear in mind if you want to win more money at casino war.

Timing your bets after signing up online with your free bonus is extremely important because you need to have a keen sense of when to play a rush and when to scale your bets back. This type of knowledge comes with experience and time at the table.

You should make sure that you understand how the different payouts work and understand the amounts that can be won from each stage of betting. This knowledge will maximize your winning potential, as you will think about the benefits of each bet before placing it.

Be a warrior to go for war

The most significant stage of any casino war session is when you and the dealer tie and you’re asked if you’d like to go to war or fold. At this point a number of players will usually take the weaker route of surrendering the hand and giving up half their starting stake. The problem with this move, however, is that this offers the casino and edge of 3.7%. In contrast, if you elect to stand and fight then you only allow the casino a 2.9% advantage. Thus, the most important piece of casino war advice you can follow is to always go to war and never surrender.

The House Edge in this game is considerable. Here’s a quick look on the number of decks played and the house advantage on each.

Casino war is fast paced game; you need a suitable bankroll to stand any chance of long-term success. Indeed, at any point in the game it’s possible to win or lose a large chunk of money, so to allow yourself enough scope to play successfully you should have at least 75 times your main bet. Thus, if you’re betting $5 per hand then you should have a starting bankroll of around $375. Thus Having a realistic bankroll and managing it correctly help you to relax and enjoy the game without having the worry of betting with and losing money which is not ‘spare’. The trick of a successful bankroll is to play with money that one can afford to lose and never to play with money that is not one’s own.

Tie bets are a misleading proposition at the casino war table. While they offer the greatest single return on your investment, they are also the least likely to succeed. Obviously when you hit a 10:1 payout it can feel like your previous 20 tie bets were worth it; however, in reality, you should avoid these bets if you want to make a consistent profit and become a long-term winner.

In simple terms in case of no tie there is a clear 50% chance of either the dealer or the playing winning the round. If, however, there is a tie, then the casino gains an edge over the player.

Some casinos will offer a bonus win for a tie after a tie. Check out this option before you choose your Casino War site. The bonus is usually at the value of the original bet. The existence of a bonus serves to lower the house advantage in favor of the player. So, in general, it is probably preferable to play at casinos where such a bonus can be taken advantage of.

It used to be thought that card counting could work in the land based casinos during a game of Casino War, but it should be remembered that this will not work in the online casino setting. A player should not waste his energies trying.