Skip to content
Home » FAQs » What are the four things to consider when playing casino war? 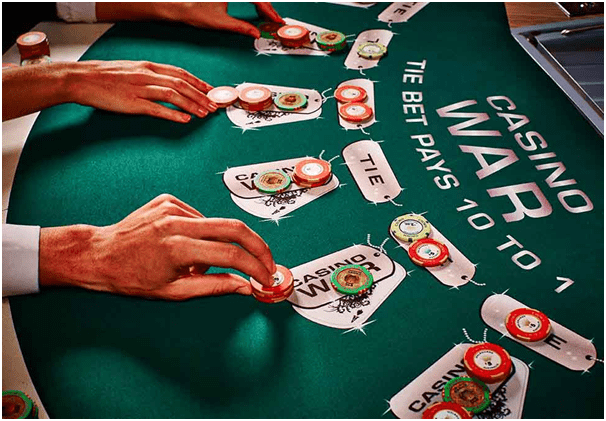 Many players think that casino war is a kids game so they may avoid playing this game at casinos. But most interesting thing is that this is a challenging game and you will love to go on war and show your opponent that you can win the game.  Here are four things to consider when playing casino war.

1. Like in war at the battle field study the lay out

If you are the smart soldier your best plan of action is to take a moment to study the lay of the land where your battle or war is going to take place. Similarly at casino you should know the basic odds of the game as a first step, and understand casino game’s probabilities and payouts before proceeding any further.

When it comes to Casino War, the game’s simplicity makes things much easier than you’d find in a game like craps, which includes dozens of different bets and corresponding payouts. In this game, you only have a single starting bet to worry about: the Ante.

After making the Ante bet, the probabilities and payouts offered under the traditional Casino War setup are as follows:

The first line in the table shows what happens when you win the high card battle to take down a hand of Casino War. Here, you’ll earn a payout of even money, or 1 to 1, on your Ante bet, so a $5 wager brings back $5, $20 returns $20, and so on. Under the probability heading, you can see that the odds of winning an Ante bet in this way stand slightly above the 50/50 mark at 50.27 percent.

This means you can expect to win the high card battle during a hand of Casino War just over half the time.

In the second line of the table, you’ll see that the odds of losing that Ante bet by virtue of a bad high card stand at 46.30 percent. Thus, you’ll win the high card game more often than you lose it.

The discrepancy between those two figures is explained by the presence of a tied high card battle. In this case, players can always opt to take the surrender option, ending the hand right then and there in exchange for half of their Ante bet back. But in almost every case, players choose to press ahead and declare war on the dealer. When this happens, the ceremonial burning of three cards takes place, before another high card standoff settles the score.

Your odds of winning and losing on the war remain the same, but the odds of ever tying at all are rather slim at roughly 7 percent. Thus, the odds of losing after a war are approximately half of that figure, or 3.42 percent.

The table helps you define the most crucial number for any gambling game: expected return. AS a player it shows the expected or the amount you can expect to bring back while making a certain wager over the infinite long run.

For the game of Casino War, the expected return rate stands at  2.88 percent – which means that for every $100 bet over time, you can expect to lose $2.88. For players who prefer the term “house edge,” that 2.88 percent figure also defines the house’s inherent edge on Casino War.

But that is not much of issue as every conceivable casino game is set up in such a way as to guarantee the house a preset edge.

2. You need to adjust to the conditions of the war ground

As you know in great wars around the world among countries any shift in the field of battle can wreak havoc on well-designed strategies.

With that wartime maxim in mind, Casino War players must be cognizant of the subtle changes to the rules that many operators choose to include in their version of the game. Whether you’re playing live land casino, or online, Casino War can be played in a few different formats.

The first rule adjustment to remain aware of concerns what happens when you tie the dealer’s card. In most versions of Casino War, a tie will give the player an option to surrender and collect half of their Ante in return, or press ahead by declaring war and paying an additional Raise bet equal to the Ante.

As you might be aware that with three cards burned and a fourth dealt face up to determine who wins the war but in case the fourth card also creates a tie then in this case, most versions of the game simply award the player with a win, using the old “tie goes to the runner” provision used in baseball.

But in other formats, the tie on a war scenario actually results in the casino paying out a “tie bonus” equal to the Ante bet. As a result, winning wars under these rules is far more lucrative than the original.

You earn benefit from having the bonus payment system in place, as you can earn an additional betting unit whenever you defeat the dealer in a war. So whenever possible, take your action to the Casino War tables that include the tie bonus, as this will decrease the house’s edge and increase your overall expected return.

The second major way that Casino War games can differ is based on the number of decks in play.

Using multiple decks at the same time increases precious house edge. That’s why single deck blackjack tables, which used to be the norm, have been largely replaced by the six  and even eight deck “shoes” that dealers use today.

For the sake of Casino War, you can expect to find the full range of deck sizes in use, both in the live and online arenas. Some houses will prefer to use single  or double decks as an enticement to nostalgia, while others opt for more decks to slightly reduce the player’s expected return.

As Surrendering is never a profitable play in Casino War, so you should take every opportunity to launch a war that presents itself during the course of play.

3. Play for the win and not for the tie

Aside from the basic gameplay dynamic, which is based on even money payouts on the Ante and Raise bets and a simple high card result, Casino War contains one secret weapon that recreational players seem to love and that is the Tie bet.

This side bet pays out 10 to 1 on your money whenever the dealer’s card and your card wind up tied.

The odds of landing tied cards on a random deal in Casino War stand at just 7 percent, so right off the bat you should realize that a 10 to 1 payout just isn’t enough. If you think about it you’re only getting 10 to 1 on your money, but the bet entails backing a worse than 14 to 1 proposition (100 / 7 = 14.28 percent).

The Tie bet offers one of the highest house edge rates in all of casino gambling – ranging from an obscene 35.29 percent when using a single deck and “dropping” to 17.83 percent under the eight deck format.

Curiously, this is the only scenario in Casino War in which the house edge rate drops as more decks are added. So if you’re intent on betting on the Tie, you should always be playing with the most possible decks.

It is not advisable though betting the Tie given in any game conditions though, because even at 17.83 percent, the house edge is purely unbeatable. You might see a lucky player cash in on that 10 to 1 payout from time to time.

4. Engaging in war offers better value than a siege

In a game like Casino War, players who pride themselves on applying skill and strategy to diminish the house’s inherent edge really don’t have all that much to do. After all, this is a game based on randomly dealing cards and hoping to hit high ones. There’s just not that much more to it.

Anything can happen in game of chance. Long losing streaks where the dealer just seems to have aces and face cards up their sleeve, extended runs of alternating wins and losses that leave you breaking even, and of course, the hot streak every gambler anticipates and these are all likely scenarios when playing Casino War.

Knowing this, you  usually bring enough to play 20 hands at your preferred stakes – $5 red chips for the most part. That means you sit with $100 worth of chips, and if those end up becoming casualties of war, then so be it. You will never buy back in for a second time in one day, because doing so would only mean chasing “bad money with good,” which all experienced punters know won’t work in the end.

Also even if you are winning more high card battles than you are losing, and building big reserves of chips by overcoming the dealer in wars, your time at the tables is still strictly monitored. Therefore games of chance are defined by swings, so you know by now to rack up those winnings and shield them from the fray.

As a Casino War player, your expectation should always be to mix it up in brief, hand to hand combat, rather than waging prolonged campaigns.

Thus besides these four things to consider you should play the game for fun and entertainment. The game of casino war is not to be taken as a cash profit business and punter it but always play with carefree mindset as you played when you were a kid.