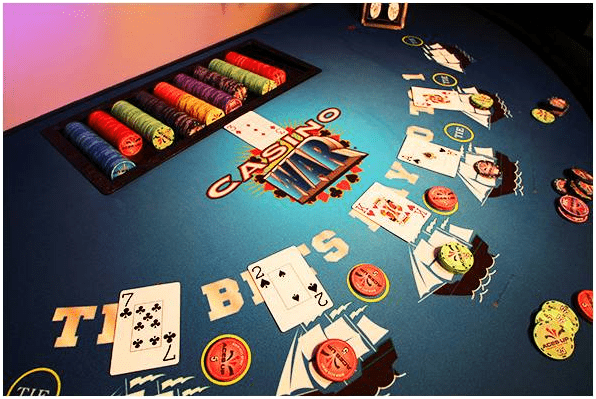 As with many popular games of chance, casino war comes with a variety of optional rules, payouts, and betting options that may be included or discarded by the house. Some of these are enticing and present genuine incentives for players, while others are designed to keep the odds in the operators’ favour.

Before moving further let us consider the three important aspects in Casino War:

In the vast majority of casino war games, three cards are burned (discarded) before the second deal whenever the player goes to war – even in online variants. However, some casinos (mainly land-based establishments) have their own interpretations where fewer or more cards are burned. Melbourne’s Crown Casino offers a prime example: when the hand goes to war, no cards are burned and the second cards are dealt immediately. Burning cards has no significant effect on the house edge.

Casino war is normally played with six decks, but in some cases (such as in many online versions) a different number of cards are used in the shoe. This can have a significant effect on odds and probabilities for particular scenarios, especially when less than three decks are in play. For example: when playing with six standard decks (312 cards in total), the house edge on a tie bet is 18.65 per cent; but using just a single deck of 52 cards, the edge on the same wager almost doubles to 35.29 per cent.

In a stock-standard game of casino war, the payout for victory after going to war is the same whether you tie or trump the dealer. However, many venues and gaming sites offer a bonus payout when the player’s second card matches the value of the banker’s. When this rule is in play, the original bet is usually paid out at 2 to 1 odds in addition to the even money return on the war wager. For example: if we bet $10 first up, then go to war with another $10 and tie on the second card, we win $50 all up. With this rule in place, the odds do improve for the player: the house edge decreases by approximately 0.36 per cent with one deck in play, and 0.55 per cent with six decks.

The Odds And Differences

As Casino War is such an easy game with very limited rules, there are only a few differences in the way it has been offered in casinos world wide.

Some casinos offer an extra payout if you “go to war” and your card matches the bank’s card again. The extra payout is equal to the original bet.

Any real money game offering less than the standard six decks will improve your chances of success in the long run. A single-deck game with no bonuses for post-war ties carries a house edge of 2.42 per cent, while a six-deck game with the same rules will favour the casino to the tune of 2.89 per cent.

Both land and web casino rarely offer short-deck casino war with a bonus payout, which has a far more critical impact on probability than the number of decks used. To demonstrate: as shown above, a game with one deck and no bonuses gives the house an advantage of 2.42 per cent; meanwhile, a game with eight decks that does include a 2 to 1 bonus payout only holds an edge of 2.34 per cent. 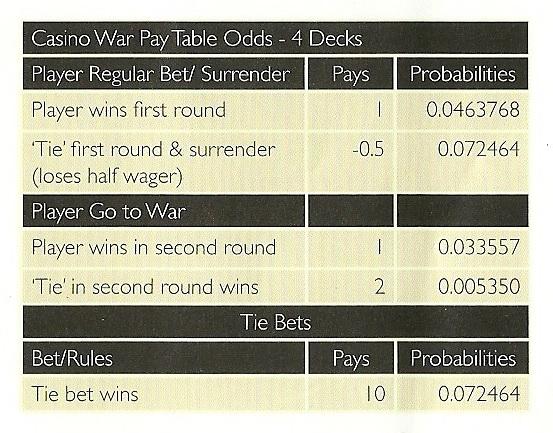 The Odds of Winning

In the situation of a tie the house gains an edge. It’s at this point your decision will influence how much you win over time. In essence, going to war has a greater expectation than surrendering; however in some live games going to war with certain ties isn’t possible. The online casino war offers a far better payout ratio than its real life counterpart. The odds of winning depend on how many decks being used. For the typical number of six decks of cards, the house edge 2.88%. If the casino only uses one deck, the house edge is 2.42%. Some casinos offer a bonus to a draw / tie, and this also changes the odds. To find out how many decks the casino uses, read the rules on the various casino sites or contact their customer support.

In Casino War a house advantage of 2.88% bet encourages more gamblers to play more complicated games with lower house edges. Many games in a casino feature worse odds, but just a few hands of Casino War should be enough to convince you to look for a game with a better expected payout and more entertainment value.

No doubt the casino or online gaming site you’re playing at has a more interesting game available, probably one with better odds than those offered by Casino War. Remember to always go head-to-head with the dealer on all ties, avoid the $1 side bet for dealer ties, and try to have a good time. Spend enough at the War table and the casino will likely reward you with a few freebies, and these free drinks and steak dinners cut away just a tiny bit at their edge. If you’re having fun, you’re winning at Casino War.