Skip to content
Home » FAQs » How Casino War became popular and a good game to play at casinos? 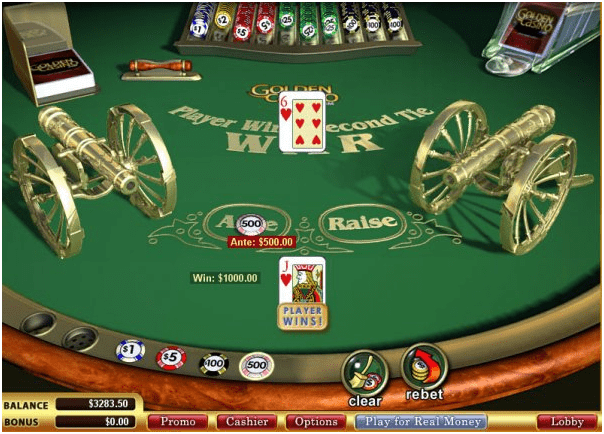 Casino war is a classic card game that can be played with two or more players where no skill or talent is required, and the only thing you need to learn is how to count. As a simple high card game, War is based on each player tabling the top card from their respective portion of the deck. Whoever plays the highest card deuces are low and aces are high, takes them both, thus creating one of the simplest gambling games ever devised.

Casino war is a good game to play where you can gamble without a personal bankroll on the line. It is very interesting to know how casino war break out in casinos or how this game became popular and a good game to enjoy.

At Reno in Nevada year 1993 a casino game design firm called BET Technology Incorporated filed a claim with the United States Patent and Trademark Office (USPTO), with the goal of protecting the intellectual property associated with their new table game Casino War.

The game was invented by Dave Sugar, an employee at the Hacienda Casino in Las Vegas at the time, and marketed by BET Technology.

Although the concept took a fair amount of time to prove its solvency to casino managers, by year 2000 major casinos on the Las Vegas Strip like the MGM Grand were running multiple Casino War tables in the pit at any one time. Just two years later, the game had been adapted for play via the Betfair online casino platform, while competitors soon followed suit with knockoffs of their own.

Sugar and BET Technology’s model for Casino War was simple and all you need was take the same basic gameplay you all grew up with and adapt it for the player versus dealer template used in most table games. Players put up a mandatory Ante wager to get the game started, and the dealer then distributes one card face up to the player, while taking one card face up for themselves.

As per the usual rules of War, the high card dealt is the winner, but in this case players scoop an even money win on their Ante bet. When the player tables the lesser card, their Ante bet is claimed by the house.

In case of tie the players have the choice to “declare war” by putting out a second Raise bet which matches their Ante. From there, the dealer will burn three cards and deal out one more face down, with the last card dealt deciding who wins the war. Players can also opt to “surrender” on a tie and take back half of their Ante bet, but invariably, when a tie occurs most people opt to hit the warpath rather than beat a retreat.

Upon winning a war with the dealer, players only receive an even money payout on their Raise bet only – while their Ante bet is returned as a push. In effect, during a war, players must risk two units in order to win one – lending the game a certain element of risk evaluation.

Finally, to lend the game a jackpot element, players can also bet on the possibility of a tie occurring. This long shot side bet pays out at 10 to 1, so most players tend to splash around on the Tie bet from time to time despite the odds being stacked against them.

Looking at this simple and entertaining gameplay casino war soon grew into a bona fide hit among recreational gamblers. Also line other childhood games being attached to modern pokies games like the Scrabble, Yahtzee, Monopoly, and Battleship the players loved casino war and were lured to this game through the power of nostalgia.

Soon as word of Casino War’s popularity among players and fairly high house edge to benefit casinos began to spread, the big boys on the casino game marketing block came calling. In 2004 the rights to BET Technology’s game portfolio were acquired by Shuffle Master, the globally leading casino game design firm which wound up becoming SHFL Entertainment in 2012.

Through the purchase of BET Technology, and with it, Casino War, Shuffle Master continued the company’s shift away from the slot machine sector and into the dominant table game brand it is today.

Today the game of Casino War is among the most widely played offerings within the casual gambling market. Also there are plenty of reasons why sophisticated, purely profit driven players tend to walk right by the Casino War table, but that hasn’t limited the game’s widespread appeal.

But for recreational gamblers who come to the casino in search of a good time, a glimpse back to the carefree nature of their own childhood card games  Casino War can’t be beat. It is because of the simplicity of the game where the rules take a minute or so to learn, the betting process is about as basic as it gets, and the element of chance is so pronounced that any session can result in big wins.