Star Gold Coast formely known as Jupiters Casino is a casino situated near the Ocean and located in the suburb of Broadbeach on the Gold Coast in Queensland, Australia. The casino, which was Queensland’s first, is situated next to the Nerang River and is operated by Star Entertainment Group. The luxury hotel of the casino is 0.1 km from The Star Gold Coast and within 5 km of Cavill Avenue and Surfers Paradise Beach. Gold Coast Convention and Exhibition Centre and Oasis Shopping Centre are also within 10 minutes. Along with 9 restaurants, this smoke-free hotel has a full-service spa and a casino. Free WiFi in public areas and free self parking are also provided. Additionally, an outdoor pool, 5 bars/lounges, and a fitness center are onsite. 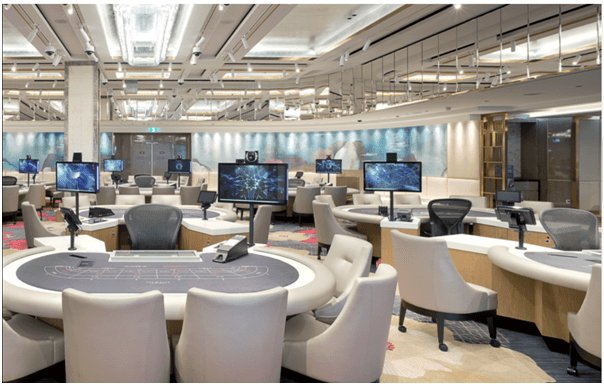 The Star Gold Coast Casino offers over 70 table games and 1600 machines, with endless ways to play. The games come with exclusive promotions and prizes for the players who become members here to play at Gold Coast.

The Star Club has a loyalty program that gives you access to a range of exclusive benefits and rewards across three world-class destinations when you play, stay or dine. Note that joining is free and easy.

There are poker games, blackjack games, dice games, roulette games, 1600 pokies machines and various other games to enjoy like Casino War and the Wheel game.

You need to be 18 years of age and over to play the games at Star Gold Coast.

Also you need to show your ID before entering the casino as evidence of age which can be  an adult proof of age card; an Australian driver licence; Australian or foreign passport with your photo.

How to play Casino War at Star Gold Coast Casino?

All you need is to visit the casino and search for Casino War table at the gaming floor.

To commence the game, you place your Casino War wager in the box marked Bet.

After the Casino War wagers have been placed, all Players and the Dealer receive one card dealt face up.

If your initial card is of the same ranking as the Dealer’s card, you will be given the option to Go to War or Surrender.

However, if you place a Casino War wager, then you may place an optional wager in the Tie bet area. Your Tie bet will only win if your initial card is of the same ranking as the Dealer’s initial card.

Before you sit down, you need to check the sign displaying the minimum and maximum bets at the table, or ask any of their gaming team for assistance.

What is Casino War Game?

The Casino War table allows for up to seven Players on one side, and the Dealer on the other. The layout features designated areas for placing your Casino War, Go to War and Tie wagers.

If you elect to Go to War you will be required to place an additional wager of equal value to your initial wager.

If you elect to Surrender you will surrender 50% of your initial wager to the Dealer and you will take no further part in that round of play.