Skip to content
Home » FAQs » Is there an optimal way to play Casino War? 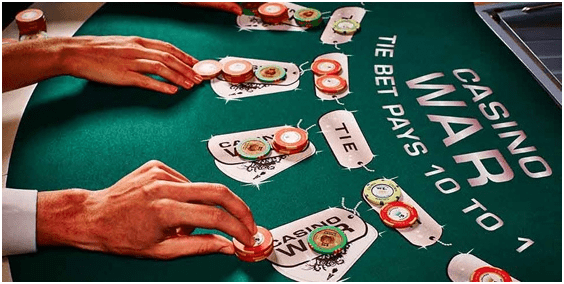 Casino war game is available to play in both land and online casinos. You will find both traditional and casino version of the game along with few other variants of this game to play. In the game of traditional casino war what you do is split a regular 52-card deck evenly between two players. Each player keeps their stack of cards in front of them in a pile, face down.

Then  at the same time  each player flips over their top card face up in front of them. Whoever has the highest card per regular poker hand rankings  in order from best to worst like so: A, K, Q, J, T, 9, 8, 7, 6, 5, 4, 3 and 2 wins that round. The winner collects both cards and places them at the bottom of their pile of cards, face down.

Then both players flip over their second card. Whoever has the highest hand wins. If both players share the same 3-card hand, they go to war again. You deal another card the fourth face down and then a fifth face up. Then they flip over the 4th card and compare hands. Then rinse and repeat. The players continue the game like this until one of them collects all 52 cards in the deck and that player wins.

In the casino variant of casino war you as a first step make the mandatory ante bet. This is the only time you can make the optional ‘tie’ side bet. This pays 10:1 if you and the dealer have the same cards. Once you make your bet, one card is dealt face up to both you and the dealer. If your card’s value is higher, you win. You’re paid 1:1 on your ante bet. If it’s lower, you lose your ante bet. If you made the tie bet, but you didn’t tie the dealer, you lose the bet. But if you tie you’ll receive a payout equal to 10x your ante bet. When you tie, you’ll also have the option to go to war. Similar to the card game. The key difference here is you have a choice. You can go to war or you can surrender. But, if you surrender you’ll get only half your ante bet back. But if you decide to go to war you’ll have to make an additional bet equal to your ante bet.

In case of war the dealer will give you one more card face down. Then he’ll burn 3 cards, followed by giving himself one more card. Then both your cards are flipped face up and compared.Whoever has the highest hand wins. If you win you’ll receive even money on the war bet, but you’ll push on the ante bet, which is where the casino’s primary edge comes from). If you lose, you lose both your bets. 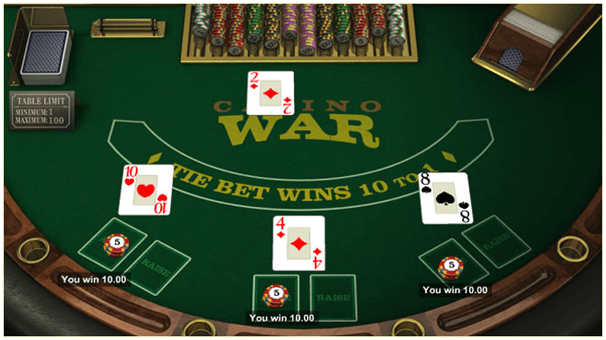 There aren’t many variants or side bets but here are the few variations and side bets you can fund at casinos. Some Las Vegas casinos  have a bonus if you tie with the dealer twice. The first time’s normal; you go to war; if you win you’ll push the ante bet and receive even money on the war bet. But if you tie a second time, you’ll receive a bonus equal to the size of your original wager.

So you get a sort of optimal way to play casino war. You see, both you and the dealer have a 46.3% chance of winning on the first card. Because of this you’d think casino war is a fair game. But that’s not the case. There are two reasons why:

Here’s a table from the Wizard of Odds which shows the house edge for casino war based on the number of decks in play, if they pay bonuses, and if you choose to surrender or play the tie bet.

So the optimal way to play casino war is to follow the above tips and your goal should be to get to as close to the 2.06% house edge as possible.