Skip to content
Home » FAQs » What does it mean by ‘Ultimate Casino War’ and how this game is played? 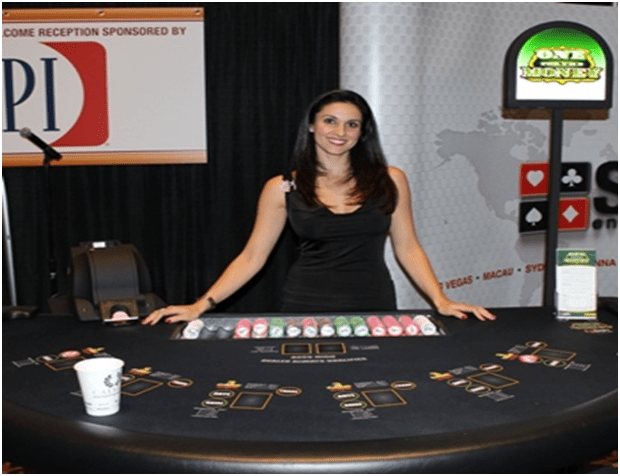 Ultimate Casino War is a war game also known as One for the Money and is available at few casinos to enjoy with a twist. You are given the choice to switch your card with the next one in the shoe, giving you a slight edge to the original Casino War that didn’t have. Also Ultimate Casino War plays just like the original, where the highest card wins the money.

Before you learn to play this variant of casino war remember that it might not be available at online casinos to play and you can find them at few land casinos in Vegas right now.

If you know how to play the basic casino war game you will find the Ultimate casino war variant a bit easier to play and understand.

Ultimate Casino War is the original trademark application for a hybrid table game known as One for the Money and was filed on behalf of SHFL Entertainment in late 2013. The inventor of the game is a frequent forum contributor on the Game Inventors page of the Wizard of Odds website, who goes by the screenname “BeachBumBabs”.

One for the Money combines elements of Casino War with two player decision points to give that classic high card game an added dimension. The aim of the game is to bring a high card into battle against the dealer, and the best card wins.

Shortly after the trademark application was filed, SHFL Entertainment was acquired by rival Bally Technologies in a $1.3 billion merger of casino game equipment titans. As a result, the rights to One for the Money were transferred to Bally Technologies. 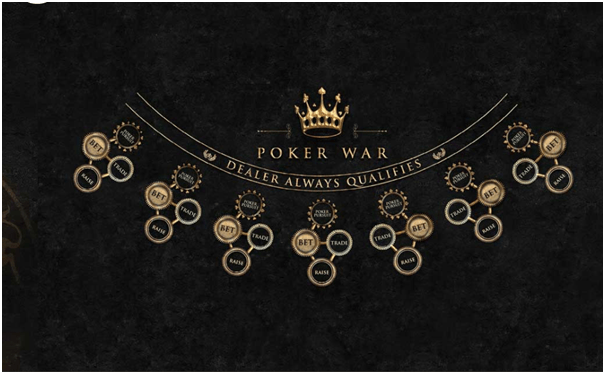 One for the Money  or Ultimate Casino War utilizes the standard 52 card deck of playing cards, and traditional poker rank values are applied where 2s are lowest and As are highest. During the base game, suits are irrelevant when comparing cards, but suits do matter when settling the optional Perfect Match side bet.

The objective of the game is to hold the highest card in a comparison with the dealer’s card.

The game designer didn’t mandate a set number of decks, but most casinos put a six or eight deck shoe into play.

In Ultimate Casino War there is a specific rule that has been added to make the game more exciting,  and that is the Switch or Trade rule. This rule will allow you to switch or trade the first card you received with the next card in the shoe. You can do this when you are not sure that your first card will be able to beat the dealer, or if the card is really low ranked.

This can only be done once, so after switching the card you will be stuck with whatever card you are dealt. This can be helpful or detrimental to your chances of winning.

How to play Ultimate Casino War? 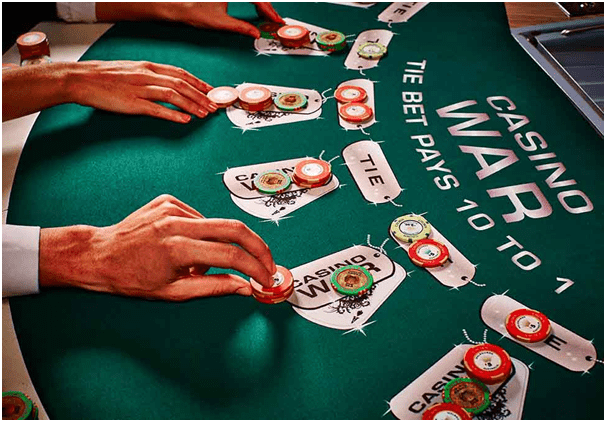 You need to place an Ante Bet so the hand of Ultimate Casino War begins when players put up a mandatory Ante bet. The sizing is up to you, so long as it meets or exceeds the posted table minimum. At this time, you can also choose to put up an optional wager known as the Perfect Match side bet.

When all players have posted their wagers, the dealer will then pass out a single card face up (the “up” card) to each player, along with two cards face down (the “hole” cards) to themselves.

After assessing your own up card, the game’s first player decision point takes place: Stand, Raise, or Switch.

Once the dealer has handed out all replacement cards to players who took the Switch, the game’s second decision point arrives: Stand or Raise. The same rules as described above still apply, and this round simply offers players who switched their cards a second opportunity to either increase their wager or hold pat.

With all bets now posted, the time has come for the dealer to reveal their two hole cards. When they do, the dealer will then select the highest card from among the two, while discarding the other (with two identical ranks, either card can be used). That high card becomes the dealer’s hand, which is then compared to your hand to determine a winner.

There are three possible scenarios when comparing the player card with the dealers:

Despite the game’s roots in the traditional card game war, ties don’t result in a three card drawing “war” to settle the score. Even in Casino War, this element has been preserved, but in this game of  Ultimate Casino War relies instead on the simple win/push/loss payout scheme.

At the end, the optional Perfect Match side bet is scored by comparing the final card you play to both of the dealer’s cards (before the dealer discards one card).

When the shoe is close to being exhausted, the dealer will remove the cards, shuffle them back into a single stack, and offer the cut card to players at the table. From there, a new round of hands will commence. Now that all bets have been settled, the dealer will discard the cards and will have the table ready for another round. 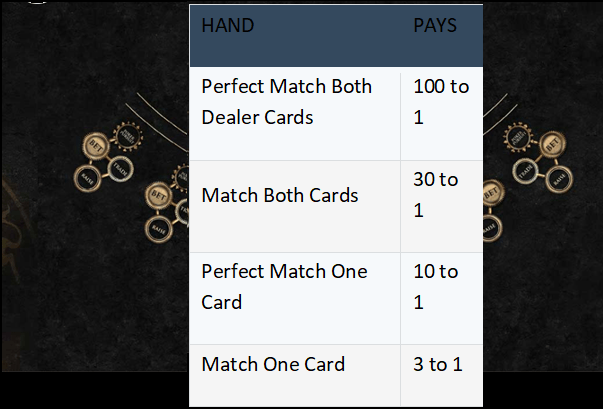 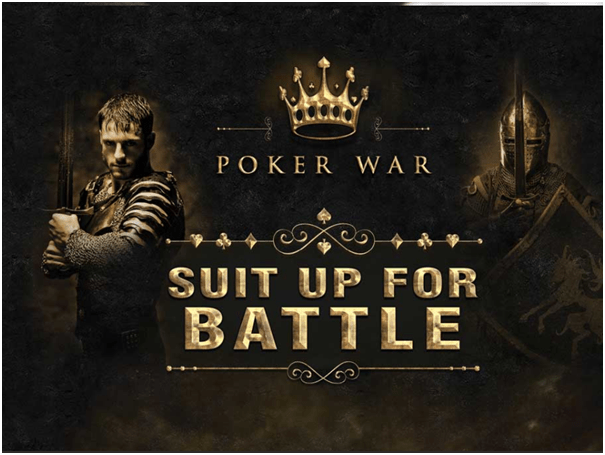 With not much of success in this game of Casino war variant you can find few real asinos offering this game.

Currently, there seems to be only casino that players can find Ultimate Casino War at, the Crown Casino in Australia. For those players looking to play at that casino, should know that they have changed its name to Poker War.

Also at few places this game is known by many other names like at the Barona Casino near San Diego, California, it is now being called “Mega War” but it still retains all of the same rules and game play structure as Ultimate Casino War. 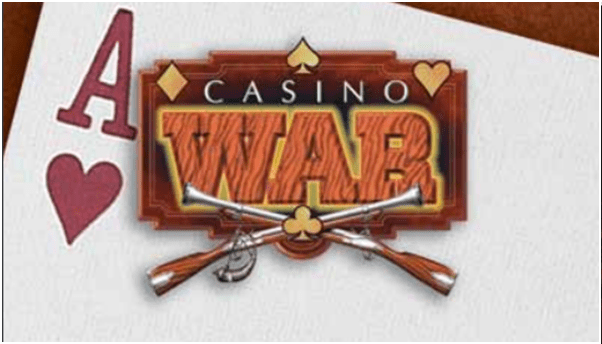 Although technically classified as a skill game, due to the presence of player decision points, this game presents one of the simplest gameplay experiences found on the casino floor. When it comes to the game’s pivotal choice of whether or not to switch your card, the following guidelines should be used to ensure that you make the most optimal decisions at all times.

On occasions when you are forced to trade cards, use the following standard to decide between standing and raising:

By adhering to these rules at all times, you can play Ultimate Casino War perfectly, giving yourself the highest possible expectation while reducing the house edge against you to 3.82 percent.

If that house edge rate seems rather high to you, that’s because it is when compared to similarly structured table games like Casino War (3.70 percent).

As this casino war game variant is much more player friendly than ordinary Casino War, so strategically speaking, when you have the choice between regular Casino War and One for the Money / Ultimate Casino War, taking your money to the latter table is always the best bet.

Finally, when deciding whether or not to place the optional Perfect Match side bet, consider that the house edge on this wager stands at 6.40 percent when using six decks, and 4.18 percent when using eight decks. In either case, this side bet tends toward the higher range of the house edge spectrum, putting it perilously close to “sucker bet” status. If you get a chance to play this game then try it for sure.